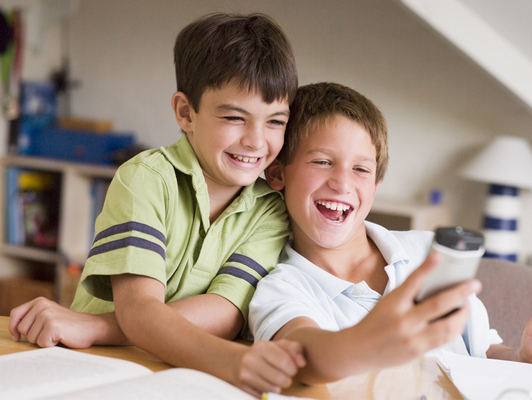 Guest Author Posted on February 15, 2013 Posted in Home and Family No Comments

It’s no secret that kids these days are great at using technology. It’s been said that a tablet in an unmarked box was dropped over a village of children without any instructions – within a few months, the children in that village had figured out how to hack the tablet.

So you can imagine how that iPad, gathering dust in the corner of your study, could be used for something else. If you feel like your kids need a bit of an outlet for their creativity or outright boredom, then you should direct them towards the iPad with these following apps…

How great is finger painting?! It literally gives kids a hands on experience with art; coupled with a child’s boundless imagination and creativity, it would seem like finger painting is the perfect way to get your children…except for the fact that, generally, you’ll be the one who has to clean it all up. Well, you can forget about checking the tots’ hair and nails for paint, because Paper is a great tool allows them the freedom of finger painting without all the mess! With endless combinations of backgrounds, colours, and paintbrushes, the only thing you’ll have to worry about is how you’ll be able to print out their masterpieces.

Here’s one for all the iPad users who haven’t been able to find the time to use the App Store properly yet. First: Photobooth is absolutely, completely free. Second: it comes standard with every iPad.

What is Photobooth? It’s, in its most basic form, a photo-taking app. However, it goes way beyond this; in fact, that’s where your kids will be spending most of their time. With an array of effects that range from artistic to downright silly, Photobooth will ensure that your children stay laughing as they keep on learning how to use technology.

The basic gist of this puzzle game revolves around redirecting water into a pipe. While seemingly dull-sounding, what the game does offer is a series of challenging levels that teach your children about physics. With critical acclaim worldwide, it’s set to be the latest craze in casual gaming.

If you haven’t heard about Angry Birds by now, you must have had your head in the ground like an (angry) ostrich. Angry Birds is a fun and addictive game that’s a bit like a puzzle, although with a fair bit of coordination involved. Thanks to its huge popularity, there isn’t an end to the reincarnations that have spawned; what this means is that, should your children cry for more levels having completely mastered the game, you can be the saviour who gets them the sequels to keep them entertained.

If you’re looking for some more ideas to entertain the children, the task may seem Herculean. Luckily, some research on the App Store brings up a few alternatives that aren’t costly at all, and provide hours of endless entertainment without posing a risk to your children’s development. Tapestry is one such alternative: it’s basically a visually based medium for telling stories – kind of like comics without the squinting. It also encourages interaction in order to tell the story, ensuring that your children stay entertained as they are taken to imaginary worlds.

If there ever were a runner up to the success of the Angry Birds franchise, it would be Temple Run. Hugely popular for its simplicity and increasing number of challenges, Temple Run is a game so addictive that you’ll find yourself begging the kids to let you have a go.

Joe Bedet is a father of three young children, who love to use his work iPad for anything other than work. He wishes he could partake in Cru Camps’ kids activities in Sydney instead of going to the office every day.